Guest blog: Three native Ontario bee species in decline and how you can help

Today, August
20th, we celebrate the little, unsung heroes of our
ecosystems. It’s the 13th annual World Honey Bee Day! The first World Honey Bee Day was held in 2009, and since then, we
have been giving a quiet nod of thanks on the third Saturday of August to
honey bees and their caretakers, the beekeepers.

Bees play a vital
role in pollination in Ontario. They help to ensure that plants can produce the fruits
and vegetables that we rely on for food. Without bees and other pollinating
super-insects, our food supply would be greatly diminished. Don’t forget how their pollination assists other plants and flowers used for medications and other products we take for granted.

Unfortunately the population of
these buzzworthy heroes has been in decline in recent years due
to pesticide use, habitat loss, and climate change. It’s had an understandably
devastating impact on our environment. This medium to
large-sized bumblebee ranges from 12 to 18mm and is found primarily in Europe,
Asia, and North America. Once found in prolific numbers in Canada and recorded
in all provinces and territories aside from Nunavut, the Gypsy Cuckoo is, as of 2014,
listed as an endangered species.

In recent years,
sightings have been scarce, and the last record of a sighting in Ontario was
way back in 2008. Primary threats include the spread of viruses from other bee
colonies, loss of habitat, climate change, and pesticide use. 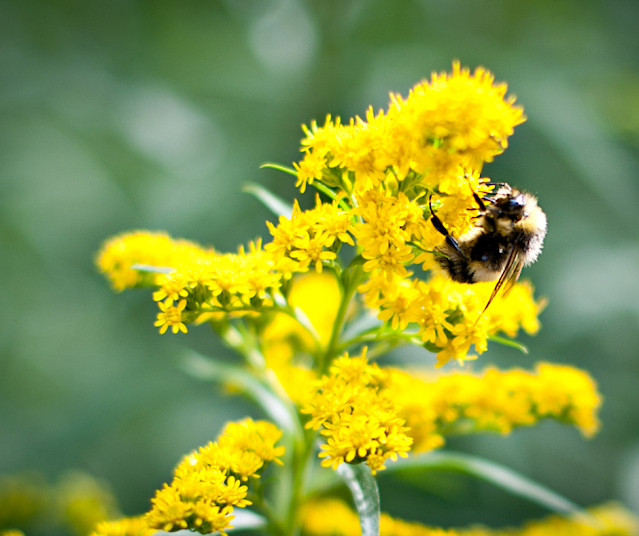 Named after the males
that sport a rusty, reddish patch on their backs, the Bombus affinis- aka Rusty-patched bumblebee– is
an integral species in the prairies and grasslands of North America.

This species of
bumblebee contributes to the production of fruits and seeds that sustain other
wildlife through pollination. Dutchman’s breeches and other organisms depend on
them for food, including ant species that eat the seeds of Dutchman’s breeches.

Once widespread and
commonly found, the species declined dramatically in the last 50 years and is
also listed as an endangered species. The loss of their habitat is largely
due to the majority of grasslands and prairies developed for human use such as
towns, farms, or highways. Other significant
contributors include pesticide use, climate change, and viruses from
neighbouring commercial greenhouses. The Yellow-bandedbumblebee, Bombus terricola, was once found in great numbers from the
east of the Rockies to Newfoundland but is currently a species at risk in Ontario. However, in the 1990s, their populations
started to decline dramatically. Worse, they now are nowhere to be found in
south and central Canada in recent years. Their official status in Ontario is Special Concern, meaning the “species lives in the wild in Ontario, is not endangered or threatened, but may become threatened or endangered due to a combination of biological characteristics and identified threats.”

Pollinating wildflowers and crops such as potatoes, raspberries, and alfalfa, these bees are an
important part of the ecosystem which is sadly being disrupted. The exact cause of
the decline in Yellow-banded bumblebees is up for debate, but the buzz is that possible causes
include pesticide use, climate change, habitat loss due to urban development,
and pathogens from commercial greenhouses.

Sightings of rare or endangered species should be reported to The Natural Heritage Information Centre (NHIC) so we can better assess the health of the species.

How can you help save the bees?

Their is no better support for bees in Ontario than Ontario Nature. Since 1931, Ontario Nature has been fighting for environment justice and wildlife conservation, as well
as educating the general public about their many campaigns. More than 155
participant organizations from throughout Ontario make up Ontario Nature’s
30,000+ users and supporter base. The goal is clear: to create a simple Ontario
where future generations will be inspired by and sustained by nature.

Some of their current
initiatives to help save the bees include:

Thanks to Ontario
Nature and the Ontario Nature Youth Council, Bee Cities and
schools are widely found across Canada. From Canada’s second Bee City, the
City of Stratford to the City of Oshawa, Canada’s 22nd Be City, cities all over the country have pledged to educate, conserve, and create
healthy habitats for our buzzing pollinators. For decades, OntarioNature has been working to safeguard our environment and the world we live in.
Members of Ontario Nature share the honour with Nature Canada as one of the best charities of 2019- now that’s something to bee proud of!

More than 110 million
acres of Protected Places have been established in Canada because of the
support of members and donors- they make and fundraise for donations and get their hands dirty, protecting the innumerable species that call those habitats their home.

With every
contribution made, every petition signed, and every action performed, we do
our part to bee better humans and safeguard our wildlife and environment in Ontario. Get involved! Subscribe to Ontario Nature’s magazine! Better yet, make a donation to support
Ontario’s wildlife. Thank you for celebrating Honey Bee Day and for bee-ing a caring pollinator protector!

Why You Should Take Care of Your Pet’s Teeth