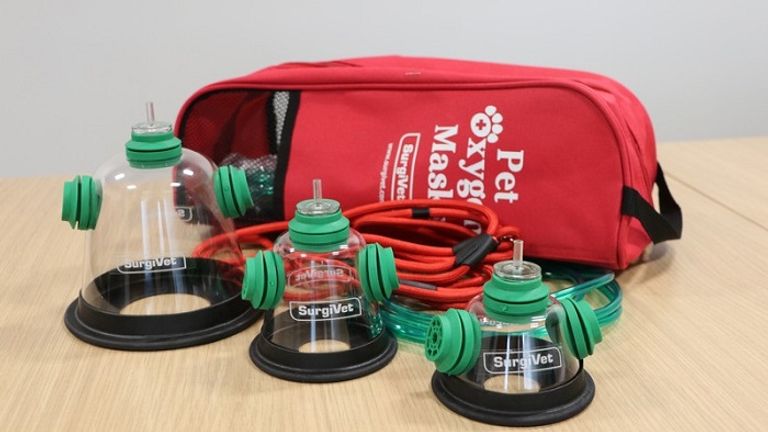 An oxygen mask has been used for the first time to rescue a pet cat from a house fire in London.

The London Fire Brigade were called to the house in Paddington on Friday afternoon and rescued two pet cats from the ground floor.

One of them received oxygen using the new equipment donated by Smokey Paws, a non-profit organisation.

Firefighters have previously had to improvise to try and revive rescued animals who have inhaled smoke.

But now the specialist kit can be used on small animals like cats, dogs, rabbits, snakes and even mice.

It is made up of three sizes of domestic pet oxygen masks, two rope leads and two sizes of muzzle.

Nathan Beeby, Station Officer said: “Having something specially designed made so much difference as the mask is properly sealed around the animal’s muzzle and all the oxygen is going into their lungs.”

He added: “Being able to administer oxygen via a properly fitted mask in the early stages will improve the chances for animals which have been saved from fires.”

The masks are part of a pilot scheme and will be carried on fire engines in Battersea, Paddington, Richmond and Hammersmith.

If the trial is a success, the kit will be deployed to stations across the city.

Read more from Sky News:
Dog freed by firefighters after being trapped underground for more than 60 hours
Around 100 firefighters battle blaze on 15th floor of London tower block

Dave O’Neill, the Brigade’s Deputy Assistant Commissioner for Operational Policy said: “Of course a firefighter’s priority is always to save human life, but we know how precious people’s pets are to them.

“We also know owners will put their own lives at risk by trying to return to a burning building to rescue them.”

London firefighters have attended over 100 fires involving pets since 2019, according to the London Fire Brigade.