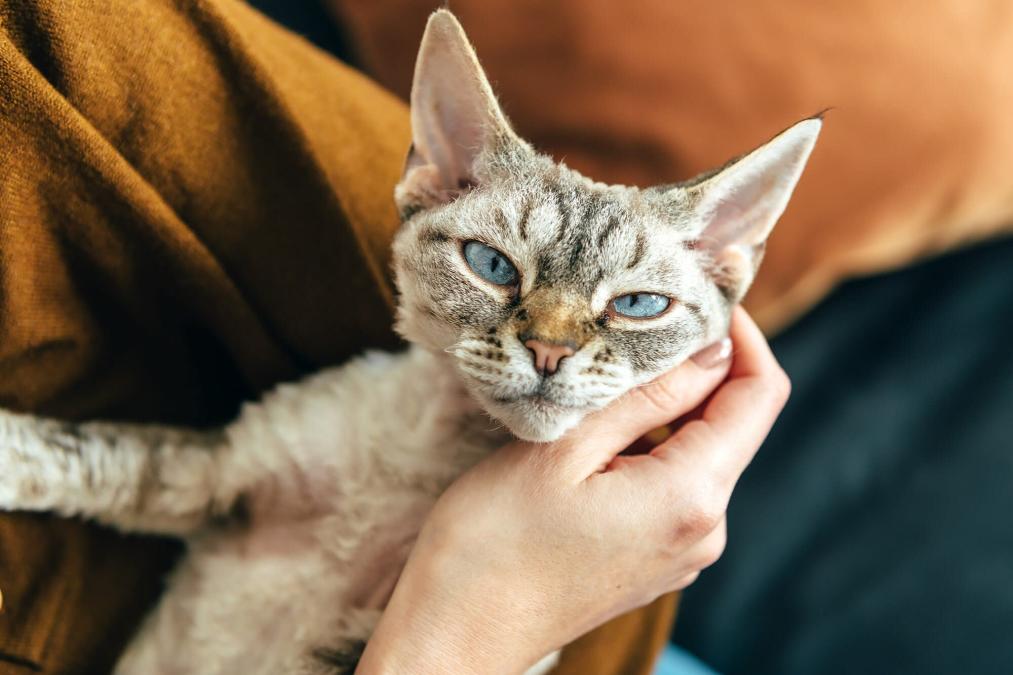 Alvaro Castillo / EyeEm / Getty If there’s one thing a Devon rex loves, it’s her people. These kitties need lots of affection and have earned a reputation as being “Velcro cats.”

Many cat fanciers joke about floof-covered yoga pants and spinning kitty fur into yarn. A fuzzy feline definitely puts all lint brushes to the test! So being curious about cat breeds that don’t shed makes total sense, especially when you’re trying to minimize the hair hurricanes or if you’re allergic to cats but nevertheless consider them purrfectly irresistible pet possibilities.

If an animal-loving genie granted us three wishes, one would certainly be for cats that don’t shed or cause allergies. Less shedding means a cat is hypoallergenic, right? Unfortunately, no. People who have feline allergies are actually reacting to a series of proteins all cats have: fel d 1 through fel d 7, which are present in their dander, saliva, and urine. In particular, fel d 1 is most common in cat dander and saliva.

This is why low-shedding or hairless cats aren’t hypoallergenic. They still produce dander, which is invisible skin cells that get into the air, and groom with their tongue, which leaves saliva on their fur. The amount of fel d 1 protein varies kitty by kitty—in fact, some people might be more sensitive to one cat breed but not another.

RELATED: 9 Best Air Purifier to Keep Pet Dander and Allergies Out of Your Home

Hairless or Nearly Hairless Cats Who Don’t Shed Much

Lynn Paolillo, CFMG, CFCG, DTS, CCE, is a certified feline master groomer, the owner of Cat Naps Cattery, and an instructor at the National Cat Groomers Institute. She tells Daily Paws that technically, all kitty hair sheds. “This means it goes through a life cycle of growing, resting, dying, and then falling out. However, whether that shedding is noticeable can vary from cat to cat: how much hair visibly comes off while petting them and how hairy your house and furniture get.”

The fine felines below might not shed as much due to the type and texture of their fur, Paolillo says. We’ve also highlighted the famed hairless cat breeds.

A sleek streak of high energy, the social and curious Cornish rex from England is also quite an attractive cat, with a velvety undercoat curled in various colors. She’s an active explorer who loves to play and scale every nook and cranny of her cat tree.

Lucy Lambriex / Getty Despite his curly coat, brushing your Selkirk rex too often can actually make his fur frizzy. A once-a-week combing will keep him tangle-free.

Sometimes referred to as “the cat in sheep’s clothing”, a Selkirk rex may surprise you with either curly or wavy fur across a full-color spectrum. Known as a large lovemuffin (sometimes up to 16 pounds!) she expects oodles of attention from her peeps and a basket full of interactive toys.

Alvaro Castillo / EyeEm / Getty If there’s one thing a Devon rex loves, it’s her people. These kitties need lots of affection and have earned a reputation as being “Velcro cats.”

Also an English native (but from another family), a Devon rex is a cuddly cutie. Adults, kids, and even other pets respond to his friendly demeanor. Don’t be surprised if he follows you around. He’s a smart one, too, eager to tackle difficult tricks. His fur is more wavy than curly, highlighted in many patterns and colors.

stefanamer / Getty Just as furry cats can have spots and different colorations, a sphynx’s skin can have the same markings. Some might be completely pink, while others have a tortoiseshell pattern.

When you consider what cats don’t shed, the adorable alien sphynx cat naturally leaps to mind. After all, they’re nearly nude, although some have downy peach fuzz rolling over their many wrinkles. A bright sphynx (who’s not really Egyptian!) is a silly little chatterbox overflowing with affection.

The multi-colored Peterbald is an intelligent Russian cat breed who might sport either a soft velour-like fuzz, a silky undercoat, a course wavy coat—or simply be bald! He radiates complete sweetness from within and has expressive body language. But he’s frequently quite ravenous, so entertain him with a puzzle feeder at mealtime.

Another Russian native, a Donskoy has almost dog-like loyalty, with a natural inquisitiveness that makes her easy to train. She prefers to be with their humans and might experience separation anxiety if left alone too long. They’re likely to be mostly hairless or nearly so.

“While you won’t see hair floating around the house, hairless cats still require regular bathing to help remove excess oils from their skin, around the nail beds, and ears,” Paolillo says. “This can be done pretty easily at home in the sink or with a washcloth and warm water.”

Yes, we all desire fluffy cat breeds that don’t shed because all that soft, silky fur is soothing to touch. But while some may appear low-shedding because they have short hair, Paolillo says that’s not always the case.

“Siamese and Bengal can still shed noticeably, especially if it’s a cat that just ‘looks’ like the breed, like from a shelter or rescue group,” she says. “They may not have the traditional sleek coat of a well-bred cat of those breeds.” So if you hear the captivating purr of one of the following kitties and want one for your very own, prepare to brush them weekly with shedding-control brushes in materials such as rubber curry and natural boar bristle.

Laura Drake / EyeEm / Getty Siamese cats can be one of four color combinations, but will always have striking blue eyes.

The clever Siamese often has something to say, so take time to understand her meows and feel free to talk back! Outgoing and athletic, she’ll enjoy activities like exercise wheels and engaging games. Totally devoted to a special person, she’ll adore the close bonding time spent combing her short, dense fur.

Seregraff / Getty Bengals are active and intelligent cats. To keep him happy and healthy, you need to give him ample mental and physical stimulation.

With a spotted or marbled short coat that reflects his Asian leopard ancestry, the gentle-natured Bengal actually prefers your lap! (And doesn’t leave a lot of cat hair behind if brushed every few days). A snazzy catio caters to his wild side while his sociable, warm personality charms everyone, especially after being properly introduced.

Angela Emanuelsson / EyeEm / Getty Even if they don’t have blue fur, British shorthairs are instantly recognizable by their round heads and chubby cheeks.

Plush like a stuffed toy, a British shorthair’s fur probably requires the least amount of care of all the kitties on this list—a quick brush occasionally should do it. Ranking high among popular cat breeds, this multi-hued beauty is laid back, not too fussy and, in stereotypical cat fashion, will slow blink at you when they want cuddles.

Snuggle alert! A LaPerm is the purrball for you if you can’t get enough head bunts, tail curls, and paws-around-the-neck hugs. You’ll enrich her life even more with simple but fun playtime activities such as tented newspapers and boxes. This cat breed doesn’t shed her curly coat much—but might molt sometimes in preparation for new hair growth.

Paolillo recommends a regular grooming routine to remove excess dead hair from your cat’s coat before it has a chance to shed around the house.

“This applies to both short-haired and long-haired cats. A 4–8 week bath and blow-dry schedule will show the biggest reduction of shedding at home.” This practice also reduces the risk of uncomfortable hairballs and matted fur.

RELATED: 10 Short-Haired Cat Breeds Who Are Perfectly Suited to Sharing a Life With